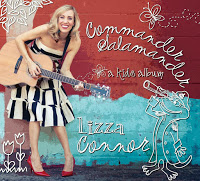 North-Texas based singer-songwriter Lizza Connor joins Pat Benetar, Wynonna & the Big Noise, Kansas and other musical acts onstage at the upcoming Wildflower! Art & Music Festival. Lizza is an award-winning artist and songwriter whose latest release, Commander Salamander, encourages healthy lifestyle for families through fun, original songs. Wildflower! is one of the area’s most recognized and anticipated musical events held at Galatyn Park in Richardson, Texas.

Lizza brings her interactive, one-of-a-kind live performance to the Kidz Korner on May 16 and 17, 2015 providing a special event show that kids and grown ups can enjoy together.

“I’m thrilled to be a part of Wildflower!,” says Connor. “As a musician and a mom, I love that Wildflower! provides an opportunity for familyes to enjoy music together.”

She will be featured onstage live with her guitar at 3 p.m. both days, and will perform the whimsical songs from Commander Salamander. Commander Salamander recently garnered a Parent’s Choice award, placing it among the best children’s music in the nation.

The Wildflower! Kidz Korner is a colorful festival stop where kids of all ages will find activities and entertainment. In addition to Lizza’s live show, the Kidz Korner boasts a karaoke stage, face painting, climbing wall, petting zoo and inflatables.

Connor released her country-folk debut CD, Runaway, to critical acclaim. She is the recipient of the prestigious Merlefest Songwriting Award. She has performed at the famous Bluebird Cafe, House of Blues Vegas and performs regularly for audiences of all ages. Her latest release, an album of music for families, has been described by the Parent’s Choice Foundation as “a Jewel meets Laurie Berkner style…Connor’s welcoming vocals convert daily routines to toe-tapping treats… Commander Salamander is a witty, endearing and fresh perspective on positive thinking, and parenting.” Whoa Jesse Records PO Box 600634 Dallas TX 75360 www.lizzaconnor.com p:(214) 468-4295